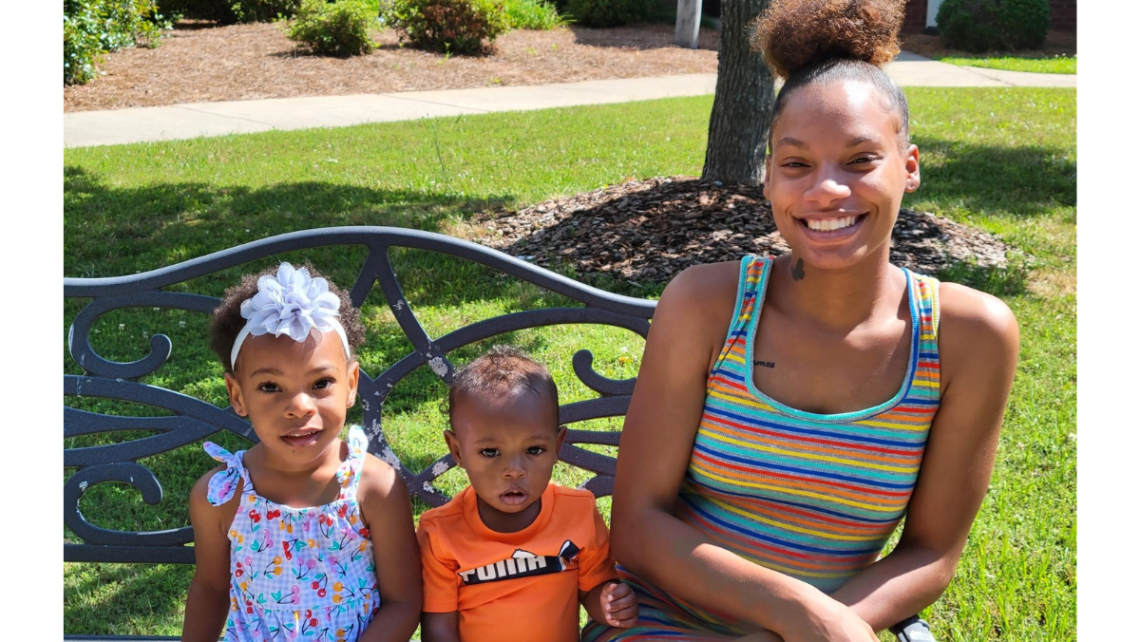 She’s twenty years old, expecting her third child, and has no family to rely on. To say her journey to Home of Hope has been challenging would be an understatement.

“I was in foster care as a baby. Because of my mom’s drug problem, I had cocaine in my system and they took me away. Then, I lived with my aunt when I was 12, but shortly after I moved back in with my mom,” she said. “I thought everything was gonna be cool, but no. I was verbally and physically abused by my mom who kept getting drunk because of my stepdad.

“One day, I’d had enough and decided to stand my ground and defend myself against her. From there, we went to court where she lied and blamed me for crazy things – she told the court she didn’t want me back.

“When I went back into the foster care system, I was just so angry about everything I was going through. I got into fights. I ran away. I stole. I got kicked out of school. And all these things I did were unnecessary, but I was just so tired. I couldn’t take it anymore,” Lexus said.

Lexus then had two children as a teenager, and unfortunately, her situation didn’t improve while she was living with the father of her kids.

She reached a turning point and realized she needed to make a change – so when COVID began ravaging New York in March 2020, Lexus and her two children left their home state and moved to Georgia.

A friend tipped her off to Home of Hope, but Lexus was hesitant.

“When she first told me about Home of Hope, I told her, ‘I’m not going to go to any shelter,’ even though she told me all these good things about it.

“But after what I went through, I decided I wanted better for myself,” Lexus said.

From that realization, Lexus decided to give Home of Hope a call.

“Ms. Michelle answered the phone and told me that who I needed to talk to wasn’t there, but to call back when Catrine [Home of Hope’s case manager] came in at 7 a.m. So I waited and waited,” she said. “Right at 7, I called and was able to get an interview. They accepted me and gave me a move-in date: February 26th. I was really happy.”

“You’re not the only person with a story”

When families move into Home of Hope, it’s not always an easy transition, and this was true for Lexus.

“I’m not going to lie – when I first got to Home of Hope, I still looked at it in a bad way. But when I came here and actually got to see the place, my whole mindset changed,” she said.

“When people think of a shelter, they think of the worst, right? But here, you have your own room and your own bathroom,” she said. “They do have rules, daily chores, and a curfew, but it’s also good. You have time to save and look for another place to live – you’re not rushed. I even told my friend about Home of Hope, and she’s here now too.”

Because of Lexus’s difficult past, trusting the intentions of others doesn’t always come naturally. But during her time at Home of Hope, even that trauma has begun to heal.

“I used to think that no one is really out to help you – that it’s only ever about money. And even when I tried to do the right things, it felt like the world was always just eating me up,” she said. “I would ask myself ‘Why am I going through this? Why am I the only one?’

“Being at the Home has made me realize that even if you’re going through a lot, you’re not the only person that has a story. When I talk to other girls here and hear their situations, it helps to know it’s not just me.”

One step at a time

Thinking back to where she came from, Lexus knows her life is different now.

“I wouldn’t be in a better place like I am now if I hadn’t come to Home of Hope. I would still be in the same place,” she said. “Before, I was depressed. I was just drained and you could tell. Since moving into the Home, I’ve been able to gain weight; I’m getting a glow.

“That’s honestly my favorite thing about being here: the food. The staff will tell you, I eat a lot,” Lexus laughed.

Aside from having a stomach full of good food, Lexus values the connections she’s made with the staff at Home of Hope and the wisdom they’ve given her.

“I’m only 20 years old, so it’s good to hear advice from people that are older than me. When I first got here, I would get frustrated and just want to give up. But the staff gave me such good advice and were the ones that kept me going,” Lexus said.

“They’ve taught me to not rush and just take one step at a time. And when it comes to talking to my kids, being from New York, I’m a little rough around the edges; but they’ve shown me how to communicate with them better – to be an example for them.

“I found out I was pregnant with my third child while at Home of Hope. But because of the staff’s help, I was able to view it as another opportunity for me to sit down and take the time to get myself together.”

“Ms. Renita didn’t have help the way I do when she was struggling, but just look at her now. She’s the one that encouraged me to go back to school. I wanted to do it, but I needed to find a program that was free. After talking to a lady that graduated from Home of Hope, Ms. Renita told me about a free high school program I could complete,” she said. “Even though we don’t see each other as much anymore, she always checks in on me and asks how school is going.

“I work all the time and then pick my kids up from school, and even when I’m not working, I always have the kids with me. But Ms. Ashley helps me a lot with my kids – watching TV with them while I do my chores and giving me breaks when I need it. And recently, when my daughter was acting up, Ms. Maureen even came over and asked ‘Can I get her for you?’ and helped put her to sleep. It was really nice.

“Even just a little bit of help makes me so happy.”

Lexus has goals for the future that she’s been able to move closer towards every day.

“While I’m here, I’m working on getting my high school diploma, but when I leave Home of Hope, I want to have my own business doing nails. That’s my biggest dream: to have my own little business and a nice little house for me and my kids.

“I know that even once I leave the Home, I’m still going to go through difficult situations, but I want to be financially stable, to be able to take care of my family and not have to worry where my money is going to come from,” Lexus said.

With the support of Home of Hope donors, moms like Lexus and their kids can receive the help they need. And this gift is not lost on Lexus.

“[To all the people who give] Thank you! Without Home of Hope, I’d still be constantly under stress, trying to figure out my next move,” Lexus said. “Here, I can be at peace and have some time to save up. I appreciate everything that you do – I’m really grateful.”