Working together to make a difference: Hendricks Cares and Home of Hope

Home / Nonprofit Updates / Working together to make a difference: Hendricks Cares and Home of Hope 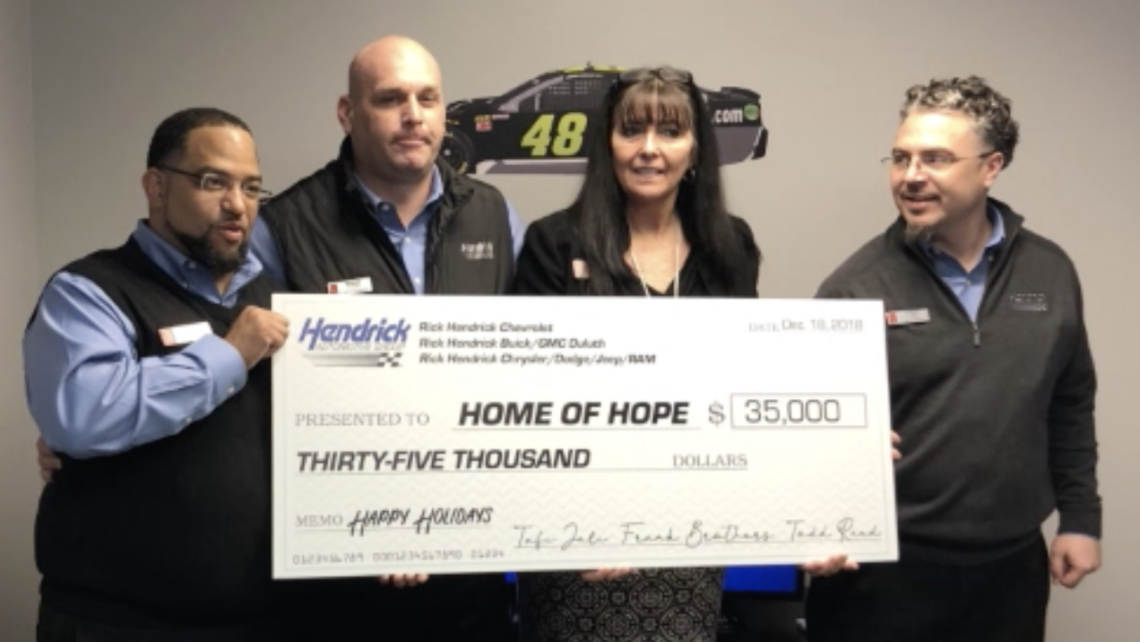 It all started with a Google search.

Back in November 2018, Tafi said he started exploring different options for community services projects. Topping their list? Buying Christmas gifts for kids in need. That’s when an online search led him to Home of Hope.

“I called Home of Hope and talked to Maureen,” explained Tafi. “She encouraged me — before I went out and bought a bunch of gifts — to come out to the shelter and see what they did.”

That visit was only the beginning.

“I called Todd when I was leaving Home of Hope and asked him if he thought we could come up with something bigger,” he said.

“As soon as Tafi left he called and said you’ve got to come see this place,” Todd recalled. “Going out there and seeing Maureen and seeing what they do and what they provide … is just amazing,”

But the two did more than visit again.

They helped launch a major fundraiser between three Rick Hendrick dealerships in the area. And in that first year, a total of $35,000 was raised for the moms and children at Home of Hope.

And they didn’t stop there. The Hendrick’s team worked together to bring a fully furnished game room to Home of Hope.

“We noticed that they (Home of Hope) had a lot of things for the younger kids, and obviously for the mothers, but they didn’t have anything for the preteens and the teenagers,” explained Tafi. “So, we partnered with a company we use, Car Stereo Plus. [Owner] Rob Riley volunteered his time to come help us with the electronics. And we were able to help put in three TVs, a PlayStation and an Xbox,” said Tafi.

Since then, the Hendrick team has made a few extra additions.

“This past year, we put two additional, smaller game rooms in each of the other houses. It provides them with a TV, a game system. Just a little room to go escape in and be a kid,” he added.

“Our employees had a great time,” said Tafi. “It was great to be involved and we decided we didn’t want it to just be a one-time thing.”

Even though they’ve helped in plenty of different ways, both Todd and Tafi are quick to share their own gratitude.

“What they provide those ladies and all their kids is far beyond just a place to live,” said Todd. “It’s just a great opportunity and experience for us to be to part of.”

Tafi agreed, saying they’re thankful for the opportunity to give back.

“We’ve been blessed,” he said. “Mr. Hendrick has definitely blessed the employees here with phenomenal opportunities. Our community has blessed us with their business. And so, finding a way to give back — to pay it forward to someone who may have come into a tough time or someone who is just trying to get their start in life — it’s so vitally important. It will pay back ten-fold.”

Maureen Kornowa, executive director here at Home of Home, echoed her own gratitude, saying employees at Hendrick’s have become more than typical donors.

“Our Rick Hendrick Automotive partners have become friends,” said added. “It is true community partnerships with people who really care about helping others that help us move the needle fighting homelessness.”

And what started years ago with a quick Google search continues — making a difference every single day for Gwinnett children.

“Sometimes, it’s very surprising what a small idea can turn into,” Tafi added.